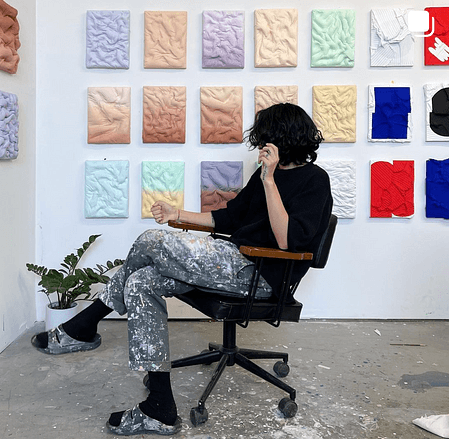 Michelle Jane Lee’s art practice is composed of visual signifiers that reference her queer and Korean heritage. Her paintings are process-based works that are not reducible to a strict set of operations, minimalist works that are not merely the result of systems thinking, and while they engage with different geometries, that does not mean they are essentialist. Rather, her aesthetic decisions point to a sense of where the calligraphic and the gestural collide, where glitch and color codes become corrupted, and they play the subtlety of eastern aesthetics off against the muscular tension of western expressionism. But Lee's works are also more than that, because all of her projects are based on a series of ciphers that draw us into a deeper space of contemplation and conflict that have to do with counter story-telling, intersectional concerns and forging allyships between queer Koreans and Korean immigrants in order to celebrate under-represented communities that have been omitted in the current cultural dialogue. Her titles often refer to rare moments spent with lovers, different languages, cultural prejudices and shifting environments. The need to have coded systems for marking a site, space or place have been important to maintianing the safety of the queer community, and Lee's work embraces this phenomenology of felt qualities which also function as a demand to be seen.